The creation of the Council was, in many ways, an experiment in governance by the California State Legislature and Schwarzenegger administration to address years of gridlock over how to manage the Delta’s limited natural resources and chart a science-based path forward for future management. Photo: Delta Stewardship Council

An Experiment in Governance: Marking Ten Years of the Delta Stewardship Council

Earlier this year, the Delta Stewardship Council quietly hit a significant milestone. Ten years ago, on April 1, 2010, the newly-formed, seven-member Council met for the first time to discuss its mandated duties set forth in the Sacramento-San Joaquin Delta Reform Act of 2009.

The creation of the Council was, in many ways, an experiment in governance by the California State Legislature and Schwarzenegger administration to address years of gridlock over how to manage the Delta’s limited natural resources and chart a science-based path forward for future management. After ten years with the Council, I can say, with conviction, the experiment is working. The Council’s central role in Delta policy and science is becoming more apparent, and more apparently necessary, with each passing year. Without a vision and a common blueprint for the Delta, we are only managing around the edges of a challenge that demands our collective best. Without strong governance and leadership, the experiment will fail.

Ushering in a New Era of Governance with the Delta Plan

Rooted in best available science and developed with input from hundreds of federal, state, and local agencies, nongovernmental groups, and individual citizens, the Delta Plan is an actionable blueprint for accomplishing the state’s coequal goals of a reliable statewide water supply and a restored Delta ecosystem. Its 14 regulatory policies and 95 recommendations guide a range of state and local actions to improve conditions and address challenges related to the Delta’s ecology, flood management, land use, water quality, water supply reliability, and unique culture; its 154 performance measures track progress and outcomes of actions by the Council and other implementing agencies. Having a complete set of performance measures for the Delta has been long sought-after but never before achieved, until now.

Since the adoption of the 2013 Delta Plan (and the Delta Science Plan, developed the same year), implementation of critical actions is advancing, including:

At a programmatic and policy level, the Council plays a vital role in coordinating actions among federal, state, and local agencies. In addition to discussions at its monthly Council meetings, the Council advances actions in the Delta Plan through the high-level leadership engaged in the Delta Plan Interagency Implementation Committee (DPIIC).

As part of its authority to oversee implementation of the Delta Plan through the oversight of certain state and local actions in the Delta, the Council coordinates with state and local partners early and often to ensure they are aware of the Delta Plan’s requirements and how those requirements should shape their project planning. This early consultation process is essential for proactively reducing opportunities for conflict and aligning actions to be consistent with the Delta Plan to improve outcomes for the Delta.

In the world of natural resource management, science and transparency are critically important for reducing uncertainty and conflict in management decisions. Recognizing this, the Council has invested tremendously in both.

Established to provide scientific information and syntheses for the state of scientific knowledge on issues critical for managing the Bay-Delta system, the Delta Science Program has fundamentally transformed public understanding of Delta science and policy issues. Though physically housed within the Council, the Delta Science Program transcends agency boundaries to provide leadership, advance collective knowledge, and apply science to the Bay-Delta’s most pressing management challenges.

Through science, we support informed and collaborative Delta decision-making by:

The updated Delta Science Plan earned the endorsement of all 18 DPIIC-member agencies, which accepted the document as a shared guide to building the collaborative science community and achieve the vision of One Delta, One Science.

Supported by the exceptional work of the Delta Science Program and its dedicated staff, the Council’s deliberations and decisions made at each of its monthly Council meetings are publicly noticed in advance, livestreamed via webcast, and archived online. While the Council is committed to constantly improving how it engages the public in its work, as shown in our new Public Participation Plan, our online meeting archive is testament to our commitment to transparency in government.

In the decade since its first meeting, the Council has doubled down on transparent, science-based decision-making and consistently invested in useable science and fruitful policy partnerships to advance the state’s goals.

As one who contributed to the development of both the Delta Reform Act and the original Delta Plan, I’ve seen firsthand the positive shift in Delta governance since then. I also recognize that indicators for Delta health are not so positive, litigation remains a too common tactic to protect regional interests, and overall, tremendous challenges lie ahead for the Council and others in protecting and managing the Delta through joint implementation of the Delta Plan.

While originally experimental in concept, the ten-year-old Council has earned a reputation as a credible and objective planning and science organization, with fantastic staff and forward-looking board leadership. The year ahead for us includes: a vision and action plan for restoring the Delta’s ecosystem in the form of an amendment to the Delta Plan; the first-ever Delta-wide climate vulnerability assessment and adaptation strategy (Delta Adapts); spearheading conversations around how to improve the way we fund and do science through DPIIC meetings, workshops, white papers and implementation of the Delta Science Strategy; consulting on and review of a range of significant projects affecting the Delta; and much more.

Join us and help make this experiment a success. The Delta depends on it. 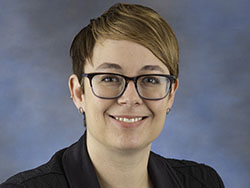 Jessica Pearson is the Executive Officer for the Delta Stewardship Council. She has been with the Council since 2011, serving as Policy Advisor and Legislative Advisor. Her career in public service began as a Capital Fellow working at the Natural Resources Agency. Pearson went on to serve as an advisor for the Director of the California Department of Water Resources and as Deputy Secretary for the California Natural Resources Agency Secretary. She earned a bachelor’s degree from UC San Diego, a master’s degree from UC Davis, and lives behind levees and amid trees in Sacramento with her husband, two children, and several backyard chickens.